All books listed below were published by Division of the Humanities faculty members in April through June or were not listed in our last installment of recent faculty publications. Please email us if you have any corrections or additions to the list. 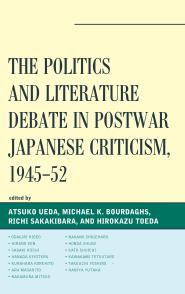 In the wake of its defeat in World War II, as Japan was forced to remake itself from “empire” to “nation” in the face of an uncertain global situation, literature and literary criticism emerged as highly contested sites. Today, this remarkable period holds rich potential for opening new dialogue between scholars in Japan and North America as we rethink the historical and contemporary significance of a number of important issues, including the meaning of the American occupation both inside and outside of Japan, the shifting semiotics of “literature” and “politics,” and the origins of crucial ideological weapons of the cultural Cold War.

This collection features works by Japanese intellectuals written in the immediate postwar period. These writings—many appearing in English for the first time—offer explorations into the social, political, and philosophical debates among Japanese literary elites that shaped the country’s literary culture in the aftermath of defeat.—from publisher's website

Bourdaghs is the Robert S. Ingersoll Professor in the Department of East Asian Languages and Civilizations. Wendy Doniger, The Ring of Truth: And Other Myths of Sex and Jewelry (Oxford University Press, 2017).

Why are sex and jewelry, particularly rings, so often connected? Why do rings continually appear in stories about marriage and adultery, love and betrayal, loss and recovery, identity and masquerade? What is the mythology that makes finger rings symbols of true (or, as the case may be, untrue) love?

The cross-cultural distribution of the mythology of sexual rings is impressive--from ancient India and Greece through the Arab world to Shakespeare, Marie Antoinette, Wagner, nineteenth-century novels, Hollywood, and the De Beers advertising campaign that gave us the expression, "Diamonds Are Forever." Each chapter of The Ring of Truth, like a charm on a charm bracelet, considers a different constellation of stories: stories about rings lost and found in fish; forgetful husbands and clever wives; treacherous royal necklaces; fake jewelry and real women; modern women's revolt against the hegemony of jewelry; and the clash between common sense and conventional narratives about rings. Herein lie signet rings, betrothal rings, and magic rings of invisibility or memory. The stories are linked by a common set of meanings, such as love symbolized by the circular and unbroken shape of the ring: infinite, constant, eternal--a meaning that the stories often prove tragically false.

While most of the rings in the stories originally belonged to men, or were given to women by men, Wendy Doniger shows that it is the women who are important in these stories, as they are the ones who put the jewelry to work in the plots.—from publisher's website

Doniger is the Mircea Eliade Distinguished Service Professor of the History of Religions in the Divinity School, Department of South Asian Languages and Civilizations, and the Committee on Social Thought. In this volume, Itamar Francez and Andrew Koontz-Garboden contrast these views as applied to the empirical domain of property concept sentences - sentences expressing adjectival predication and their translational equivalents across languages. They demonstrate that property concept sentences vary systematically between possessive and predicative form, and propose a transparentist analysis of this variation that links it to the lexical denotations of basic property concept lexemes. At the heart of the analysis are qualities: mass-like model theoretic objects that closely resemble scales. The authors contrast their transparentist analysis with uniformitarian alternatives, demonstrating its theoretical and empirical advantages. They then show that the proposed theory of qualities can account for interesting and novel observations in two central domains of grammatical theory: the theory of syntactic categories, and the theory of mass nouns. The overall results highlight the importance of the lexicon as a locus of generalizations about the limits of crosslinguistic variation.—from publisher's website

Francez is Assistant Professor in the Department of Linguistics. 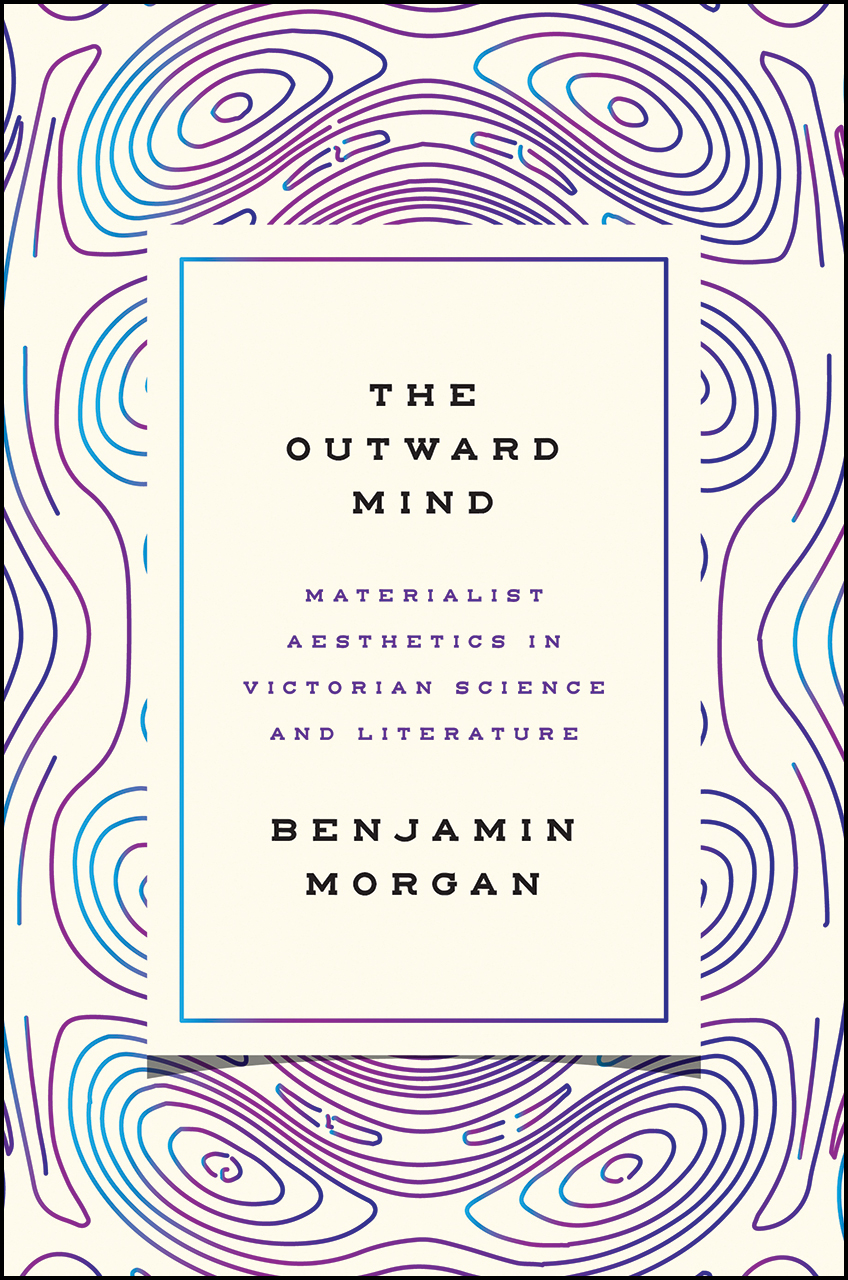 Though underexplored in contemporary scholarship, the Victorian attempts to turn aesthetics into a science remain one of the most fascinating aspects of that era. In The Outward Mind, Benjamin Morgan approaches this period of innovation as an important origin point for current attempts to understand art or beauty using the tools of the sciences. Moving chronologically from natural theology in the early nineteenth century to laboratory psychology in the early twentieth, Morgan draws on little-known archives of Victorian intellectuals such as William Morris, Walter Pater, John Ruskin, and others to argue that scientific studies of mind and emotion transformed the way writers and artists understood the experience of beauty and effectively redescribed aesthetic judgment as a biological adaptation. Looking beyond the Victorian period to humanistic critical theory today, he also shows how the historical relationship between science and aesthetics could be a vital resource for rethinking key concepts in contemporary literary and cultural criticism, such as materialism, empathy, practice, and form. At a moment when the tumultuous relationship between the sciences and the humanities is the subject of ongoing debate, Morgan argues for the importance of understanding the arts and sciences as incontrovertibly intertwined.—from publisher's website

Morgan is Assistant Professor in the Department of English Language and Literature. 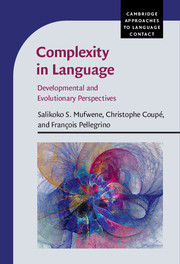 The question of complexity, as in what makes one language more 'complex' than another, is a long-established topic of debate amongst linguists. Recently, this issue has been complemented with the view that languages are complex adaptive systems, in which emergence and self-organization play major roles. However, few students of the phenomenon have gone beyond the basic assessment of the number of units and rules in a language (what has been characterized as 'bit complexity') or shown some familiarity with the science of complexity. This book reveals how much can be learned by overcoming these limitations, especially by adopting developmental and evolutionary perspectives. The contributors include specialists of language acquisition, evolution and ecology, grammaticization, phonology, and modeling, all of whom approach languages as dynamical, emergent, and adaptive complex systems.—from publisher's website

Mufwene is the Frank J. McLoraine Distinguished Service Professor in the Department of Linguistics. 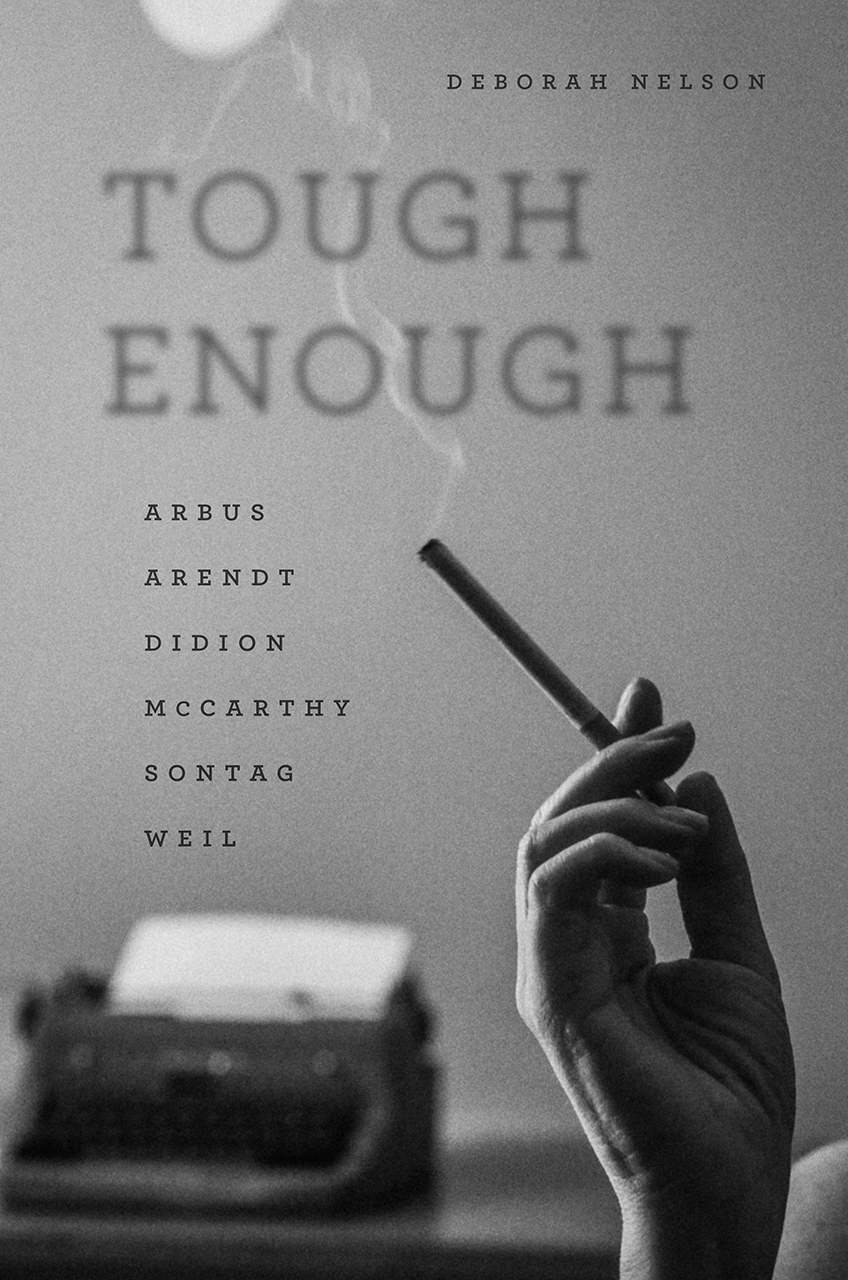 This book focuses on six brilliant women who are often seen as particularly tough-minded: Simone Weil, Hannah Arendt, Mary McCarthy, Susan Sontag, Diane Arbus, and Joan Didion. Aligned with no single tradition, they escape straightforward categories. Yet their work evinces an affinity of style and philosophical viewpoint that derives from a shared attitude toward suffering. What Mary McCarthy called a “cold eye” was not merely a personal aversion to displays of emotion: it was an unsentimental mode of attention that dictated both ethical positions and aesthetic approaches.

Tough Enough traces the careers of these women and their challenges to the pre-eminence of empathy as the ethical posture from which to examine pain. Their writing and art reveal an adamant belief that the hurts of the world must be treated concretely, directly, and realistically, without recourse to either melodrama or callousness. As Deborah Nelson shows, this stance offers an important counter-tradition to the familiar postwar poles of emotional expressivity on the one hand and cool irony on the other. Ultimately, in its insistence on facing reality without consolation or compensation, this austere “school of the unsentimental” offers new ways to approach suffering in both its spectacular forms and all of its ordinariness.—from publisher's website

Nelson is Associate Professor in the Department of English Language and Literature. 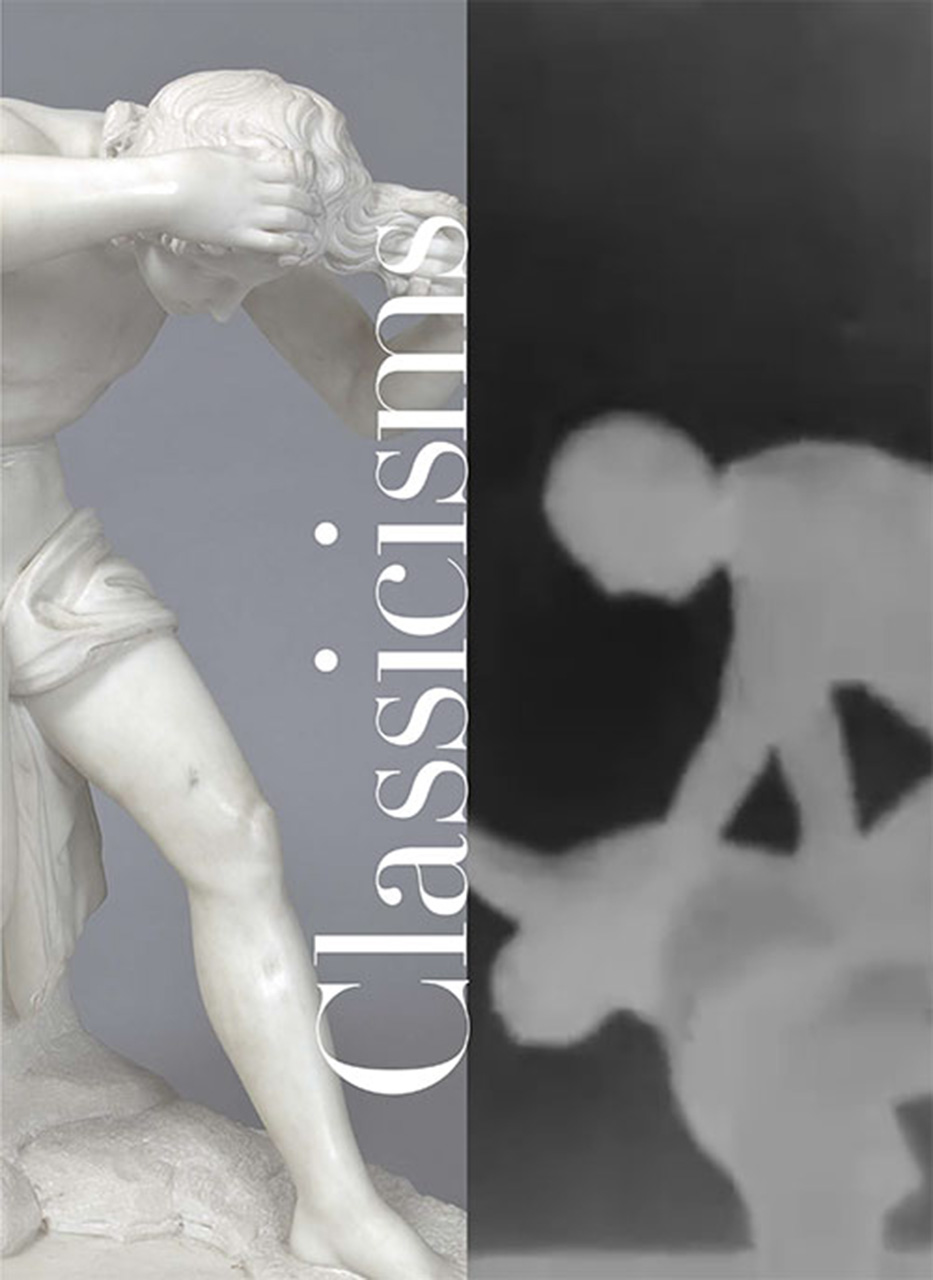 As an aesthetic ideal, classicism is often associated with a conventional set of rules founded on supposedly timeless notions such as order, reason, and decorum. As a result, it is sometimes viewed as rigid, outdated, or stodgy. But in actuality, classicism is far from a stable concept—throughout history, it has given rise to more debate than consensus, and at times has been put to use for subversive ends.

With contributions from an interdisciplinary group of scholars, this volume explodes the idea of classicism as an unchanging ideal. The essays trace the shifting parameters of classicism from antiquity to the twentieth century, documenting an exhibition of seventy objects in various media from the collection of the Smart Museum of Art and other American and international institutions. With its impressive historical and conceptual reach—from ancient literature to contemporary race relations and beyond—this colorfully illustrated book is a dynamic exploration of classicism as a fluctuating stylistic and ideological category.—from publisher's website

Bart Schultz, The Happiness Philosophers: The Lives and Works of the Great Utilitarians (Princeton University Press, 2017).

In The Happiness Philosophers, Bart Schultz tells the colorful story of the lives and legacies of the founders of utilitarianism—one of the most influential yet misunderstood and maligned philosophies of the past two centuries.

Best known for arguing that "it is the greatest happiness of the greatest number that is the measure of right and wrong," utilitarianism was developed by the radical philosophers, critics, and social reformers William Godwin (the husband of Mary Wollstonecraft and father of Mary Shelley), Jeremy Bentham, John Stuart and Harriet Taylor Mill, and Henry Sidgwick. Together, they had a profound influence on nineteenth-century reforms, in areas ranging from law, politics, and economics to morals, education, and women's rights. Their work transformed life in ways we take for granted today. Bentham even advocated the decriminalization of same-sex acts, decades before the cause was taken up by other activists. As Bertrand Russell wrote about Bentham in the late 1920s, "There can be no doubt that nine-tenths of the people living in England in the latter part of last century were happier than they would have been if he had never lived." Yet in part because of its misleading name and the caricatures popularized by figures as varied as Dickens, Marx, and Foucault, utilitarianism is sometimes still dismissed as cold, calculating, inhuman, and simplistic.

By revealing the fascinating human sides of the remarkable pioneers of utilitarianism, The Happiness Philosophers provides a richer understanding and appreciation of their philosophical and political perspectives—one that also helps explain why utilitarianism is experiencing a renaissance today and is again being used to tackle some of the world's most serious problems.—from publisher's website

Schultz is Senior Lecturer in the Department of Philosophy. 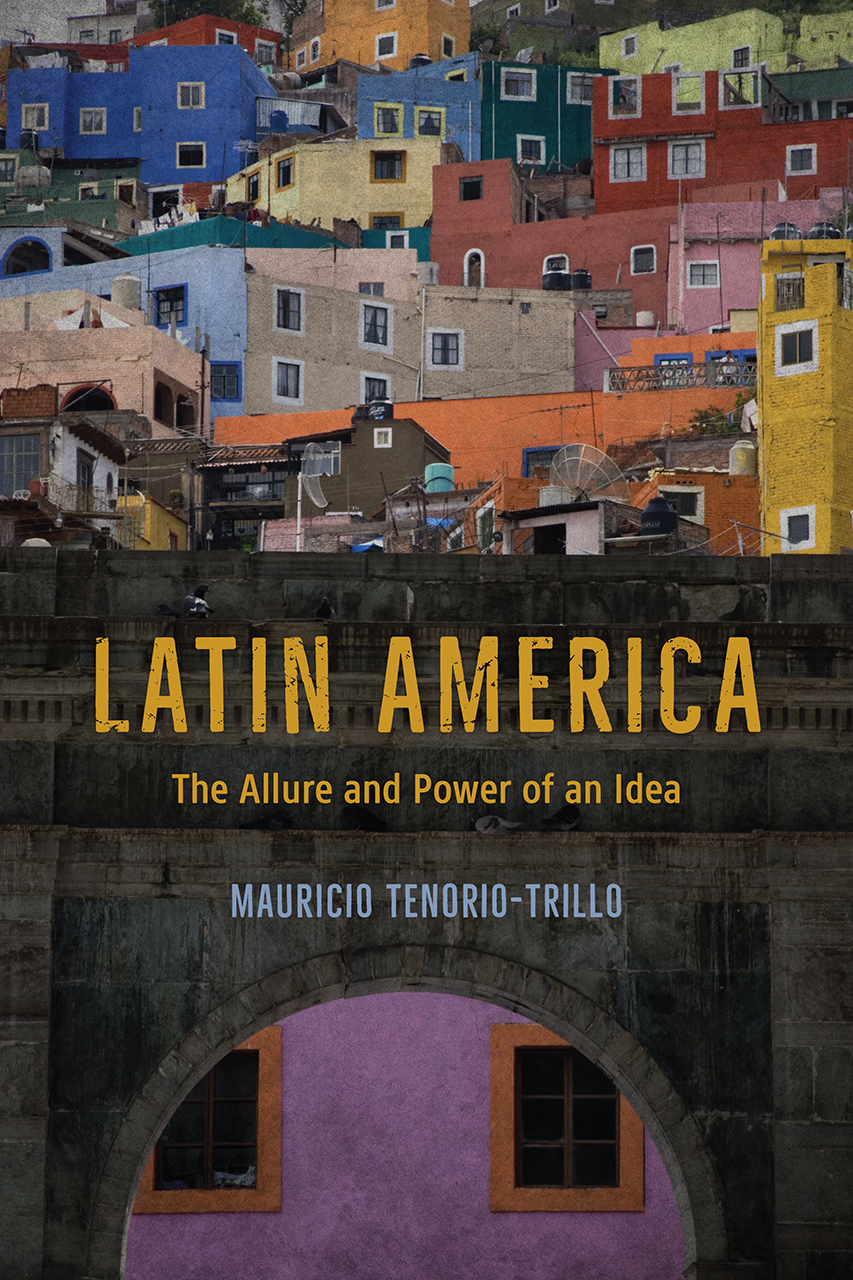 Mauricio Tenorio-Trillo, Latin America: The Allure and Power of an Idea (University of Chicago Press, 2017).

“Latin America” is a concept firmly entrenched in its philosophical, moral, and historical meanings. And yet, Mauricio Tenorio-Trillo argues in this landmark book, it is an obsolescent racial-cultural idea that ought to have vanished long ago with the banishment of racial theory. Latin America: The Allure and Power of an Idea makes this case persuasively.

Tenorio-Trillo builds the book on three interlocking steps: first, an intellectual history of the concept of Latin America in its natural historical habitat—mid-nineteenth-century redefinitions of empire and the cultural, political, and economic intellectualism; second, a serious and uncompromising critique of the current “Latin Americanism”—which circulates in United States–based humanities and social sciences; and, third, accepting that we might actually be stuck with “Latin America,” Tenorio-Trillo charts a path forward for the writing and teaching of Latin American history. Accessible and forceful, rich in historical research and specificity, the book offers a distinctive, conceptual history of Latin America and its many connections and intersections of political and intellectual significance. Tenorio-Trillo’s book is a masterpiece of interdisciplinary scholarship.—from publisher's website

Tenorio-Trillo is the Samuel N. Harper Professor in the Departments of History and Romance Languages and Literatures.